Vlad, his wife Nataliia, and their two sons were forced to flee Ukraine when the war broke out. Vlad was an evaluation manager at the Kharkiv Airport and Nataliia worked as an interior designer. After a long journey, they finally reached Hungary in the middle of the spring after fleeing from Kharkiv, one of the cities first hit by shelling.

After the eruption of war, Vlad and Nataliia stayed in Ukraine because their son Dimitrii had a pressing dental issue. In fact, they had just scheduled a dentist appointment when the bombs started to fall. When the danger mounted and they were finally forced to leave the country, their first concern was to find a dentist who could attend to Dimitrii’s urgent dental issue.

Vlad spoke of his horror and disbelief when the war broke out. “The first challenge we faced was to believe that, actually, in the 21st-century, war is happening in Europe. We still cannot believe it. Every day we wake up and like... the war is in our home, it is unbelievable."

“Saving our lives was the biggest challenge.”

The second challenge was to assess the danger and understand which parts of their city were hit by the shelling. "Kharkiv is a huge city, almost the same as Budapest. 1,5 million people live there, and you did not know what was going on or where. It was very terrifying to leave the house to buy some food for the kids because you did not know what could happen to you," he said.

As they had been living in Kharkiv’s city center, the family was relatively protected from the bombings. Despite this, Vlad recounts other problems. "The city center was insane. Because of the traffic jams, it would take 5-6 hours just to leave the city. There was no fuel in the petrol station, no food in the supermarket... It was challenging to find food and water but also safety, because you did not know what would happen next”.

“After 2-3 days we realized that it was not safe, and on the fourth day, we realized the shelling was not only happening around the city, but it also started in those districts which are closer to the center,” he continued.

"It was 8 o'clock in the morning,” Vlad says, recalling the precise time when shelling began to destroy buildings close to the centre where they lived After this, we started to think about how to leave the city because as the bombs started to hit the city centre, we realized that it was not safe anywhere, and we decided to flee”.

It was 6 am when they left their home, with their two small children. “We could not see clearly; we passed some buildings that were hit the night before we left and there was a lot of rubbish. The shelling then became concrete,” he recounts. “To leave the city where the military action was ongoing was almost impossible.”

Eventually they managed to escape the city and headed west. "At first we traveled to Germany. One of my friends helped us to find accommodation and a dentist there, but [my son’s] medical problem was quite difficult, so it took a long time to fix it. We spent almost 3-4 weeks in Berlin, and only after this were we able to reach Budapest," Vlad recalls.

Once safely in Budapest, IOM in Hungary, in cooperation with Airbnb.org, provided Vlad an his family with short-term accommodation in a comfortable apartment. As their basic needs were being covered, Vlad was then able to start looking for a job in Budapest. 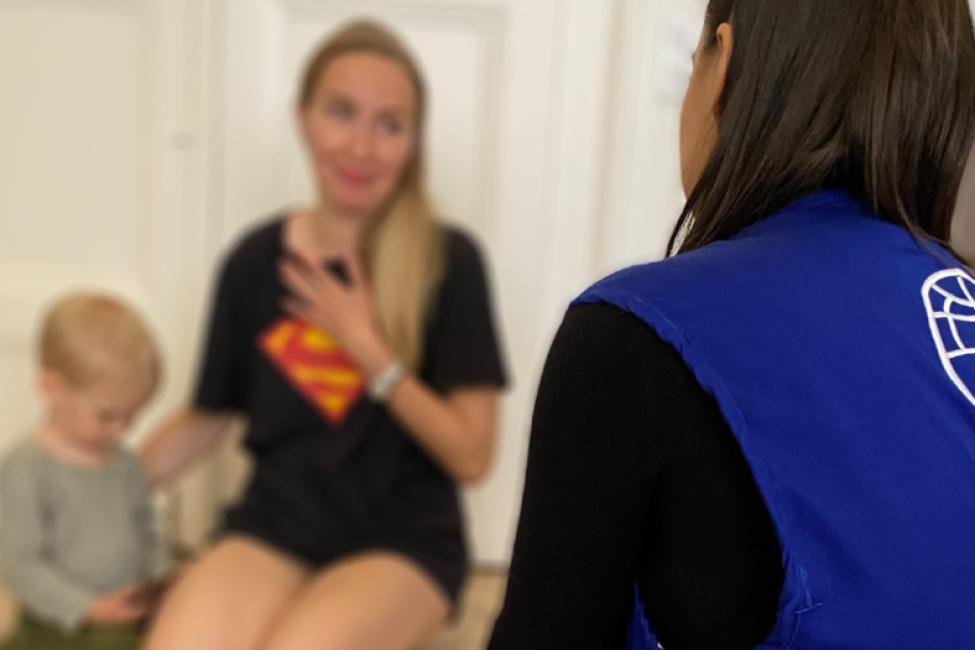 Vlad and his family have moved to their own apartment in Budapest and Vlad has found a job at Budapest’s Airport. Things are looking up.  The family is safe and settling into life in Hungary.  Yet they still face many uncertainties, challenges, and a longing for home.

“The kids haven't managed to get new real friends here as there is still a language barrier. They try to find a common language with local kids when playing with them” Nataliia said. Yet, Nataliia remains optimistic: “We have lovely neighbors, and we can talk with them, they try to help with everything they can,"she says.

The family's short-term plan is to find a kindergarten for the kids. Nataliia is also hoping to find job opportunities in Hungary.

"We do not know what the future holds, as nobody knows when the war will end and what our home will look like,” she says.

Although they are concerned about the uncertainty around employment and education as well as access to basic goods and services in Ukraine, Vlad and his family are resolute in their hope to return to their home country one day.

“The younger kid is doing well, but the older one asks from time to time when we will go back home.”

Although challenges remain, Vlad and Nataliia are content to have achieved the goal to keep their family safe and allowing their kids a chance to “grow in a normal way and have a kid’s life”.

IOM Hungary is mobilizing teams and boosting capacity in Ukraine and neighbouring countries to respond to the growing humanitarian needs of Ukrainians forced to flee the country, those internally displaced and stranded third-country nationals. IOM Hungary also offer immediate assistance, as well as medium- and long-term accommodation and providing Non-Food Items (NFIs), hygiene kits, household items. In this partnership with Municipality of Budapest IOM Hungary is running an Info Point at Nyugati railway station and also in cooperation with UNHCR in the downtown of Budapest to provide information and immediate assistance with legal counselling, temporary protection in Hungary and accommodation to those forcibly displaced from Ukraine. IOM also offers individual counselling to the beneficiaries, including looking at medium- and long-term solutions responsive to their health, protection, shelter, water and sanitation needs. As far as Third Country Nationals (TCNs) are concerned, they are also offered individual counselling on humanitarian voluntary return and the migration pathways applicable in their case.