Ukraine, 19 August 2022 – Humanitarians in Ukraine are not new to crises. In 2014, the armed conflict in the east of the country caused a wave of displacement, uprooting almost 1.5 million people. However, the invasion on 24 February has been ravaging the country for six months and caused an internal and external displacement of over 13 million people, spurring a larger system into overdrive. Thousands of volunteers, first responders and humanitarians mobilized and joined efforts, despite facing personal challenges, including displacement, loss of home and separation from their loved ones.

“I see myself in the eyes of displaced persons”

Back in February, Yevheniia Kovalenko was the Head of the International Organization for Migration (IOM) Field Office in Sievierodonetsk in the Luhansk Region. The city, which has a population of about 100,000 people, became her second home in 2016 after she fled the non-government-controlled part of the region. The entire IOM team in Sievierodonetsk shared the same fate of displacement. They managed to start anew, finding accommodation, sending children to school and assisting conflict-affected people through IOM’s numerous projects.

“Despite the ongoing conflict in eastern Ukraine, residents of Sievierodonetsk tried to find stability in their daily lives, accepting this as the new normal. Our work as IOM was aimed at supporting the most urgent economic recovery, and empowering affected people. On 24 February, the fragile peace collapsed again, taking with it years of humanitarian and development progress,” Yevheniia recalls. Sievierodonetsk is now occupied by the Russian Federation after heavy fighting destroyed almost 80 per cent of civilian housing, including those of humanitarian workers.

In February, Yevheniia’s team relocated to western Ukraine and established IOM’s operational presence in the city of Ivano-Frankivsk from scratch. In the first chaotic days of the war, when the city was overcrowded with people fleeing from fighting, some of the staff members lived in the collective centres for displaced persons, as it was impossible to immediately find any other place to stay.

Yevheniia’s main priorities were to find accommodation for colleagues, as many had left with families and children, and to kick start IOM’s local response as the unprecedented crisis unfolded.

“Being displaced twice, we understand more than anyone the situation of millions of Ukrainians. When meeting displaced people, I see the 2014 version of myself in their eyes. Back then, I was a mother with a little child, with no strength to face the war. Now, I feel more empowered because I know how to act and how to help others. We are dealing with the needs on a bigger scale but also our understanding of the problems has grown,” says Yevheniia, who is now leading IOM’s regional hub with 13 national and international staff members, responding to the needs of displaced Ukrainians hosted in the region.

One of the primary concerns of IOM is improving the living conditions for displaced persons staying in collective centres where up to 100 people sometimes share one room. In Ivano-Frankivsk Region, about 4,500 people are staying in such centres. IOM’s assistance to these facilities includes household appliances, blankets, and individual hygiene kits, as well as basic repairs.

“The conditions in which people live are far from being normal. I see how our work makes a difference. While focusing on emergency response, we are starting to think of recovery efforts as many displaced persons have nowhere to return to and will need to build their lives again. As we did twice already.”

“When everyone was in panic, we became a real pillar of support for people”

The speed, continuity, and scale of IOM’s humanitarian response in Ukraine was made possible not only by the efforts of its humanitarian workers, but also a network of 50 local partner civil society organizations with operations on the ground. To address the growing needs, most of them have shifted the focus of their operations in the blink of an eye and are now focusing on providing humanitarian assistance.

A few weeks after the invasion of Ukraine, the first batch of IOM’s aid – hygiene and baby kits, mattresses, solar lamps, sleeping bags, and kitchen sets – reached Zaporizhzhia in south-eastern Ukraine. In recent days, Zaporizhzhia has drawn attention as the site of the largest nuclear power plant in Europe and the target of military activities which, according to the United Nations Secretary-General, António Guterres, could lead to catastrophic consequences not only for the immediate vicinity, but for the region and beyond.

“Before 24 February, we had not dealt with a humanitarian response. We had never handed over hygiene kits or food. It was a new challenge for us. We have grown from delivering 120 kits daily to 20-30 tons of aid,” explains Anna Chernova, a programme manager at the IOM partner charity foundation Posmishka UA, which used to focus on expanding the country’s social welfare system and counter-trafficking activities.

Currently, the foundation is working in the logistics hub in Zaporizhzhia – the new heart of the city, which receives all newly arrived displaced persons, mostly from temporary occupied territories of this region, as well as from Kherson and Donetsk. Public authorities, social services and civil society organizations work closely here, so that people can get all available assistance: from information on the resumption of education for children to accommodation in collective centres and receiving family hygiene kits. In front of the hub, Posmishka UA has set up a field kitchen, offering hot meals to people. 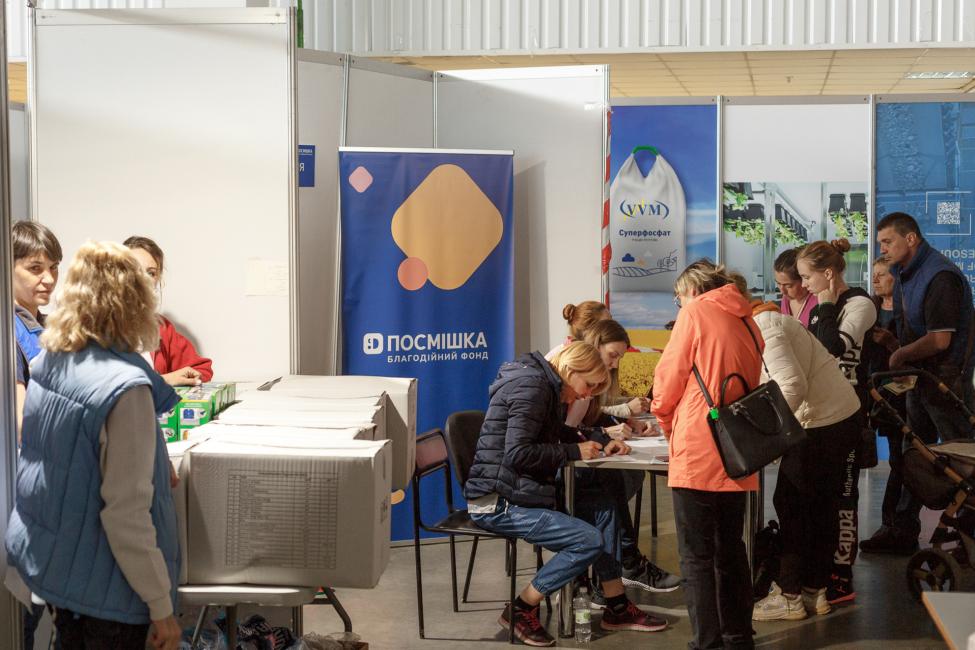 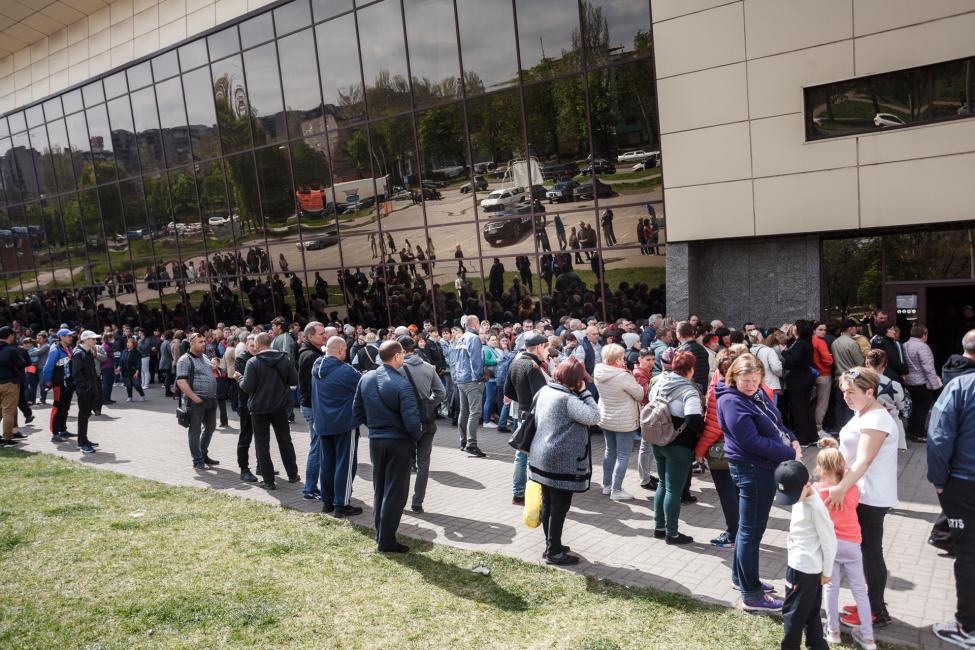 People who come here have gone through more than 20 checkpoints on foot to cross the front line, fleeing from shelling and bloodshed. Humanitarian workers here help displaced persons and vulnerable locals, as well as people who decide to return home to the temporarily occupied territories, giving them the basic necessities for the difficult route.

“People who come to Zaporizhzhia do not expect to receive any help. They do not believe that someone is waiting for them here, so they are very touched by our support,” recalls Anna.

The team says that the needs of people in Ukraine over the past months have remained almost the same, but have grown in scale. Rising unemployment makes it difficult covering basic things such as food, hygiene products, solar lamps, mattresses, and medicine.

“Our hub could receive up to 3,000 people daily when the green corridors were working,” says the team who also helps civilian evacuees. In May, the city became the endpoint on the evacuation route organized by the United Nations for civilians hiding in the bunkers of the Azovstal plant in Mariupol. In Zaporizhzhia, these people who went through hell on earth were warmly met by volunteers and international organizations, who provided people with water, food, and psychosocial support.

“People have lost faith – this is what we aim to restore”

Despite challenges, the team of Posmishka UA in Zaporizhzhia has only grown, remaining true to the principle of staying and delivering. There are 65 volunteers – locals and internally displaced persons – working at the foundation on a permanent basis. They help to unload, sort, and distribute humanitarian aid. Volunteers are a boon for public organizations in Ukraine, which usually do not have enough funds to develop operational capacities. For Posmishka UA, working close to the front, these courageous people are a vital human resource.

Anna is one of the volunteers at the Posmishka UA mobile field kitchen. Her war began back in 2014. She had to save her children for the second time already – first, running away from Donetsk six years ago when the hostilities broke out in eastern Ukraine, and then from Enerhodar in southern Ukraine in spring 2022.

Anna says that her first experience of displacement was very difficult. Civil society organizations were the only ones that provided her family with assistance. Fleeing the war for the second time, Anna unleashed her inner power to support others, so that no one would be left alone with their problems.

People who come here for a hot meal receive something even more valuable – attention and a pinch of positivity from Anna and other volunteers, who have already become one supportive family.

“Why am I here? Because I understand what the people are going through. I've been through this before, so I can support them emotionally, help restore their faith in what the next day will bring and in people,” says Anna.

Safe and settled in Budapest but longing for home in Kharkiv